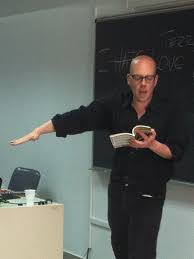 Los Angeles poet Brendan Constantine has an assignment for his students called “The Opposites Game.” He gives them a famous line of poetry and asks that they create a “new” poem by changing each word to its opposite.

As a teaching exercise, you can see how this could prove an interesting prompt for student creativity. Only, as is the case in the video below, sometimes the opposite of a word doesn’t surrender easily.

Will this prove a weak point in the assignment? Hardly. It’s the strength of the assignment, because it scatters student thoughts in multiple directions.

For instant, for his video example on youtube, Constantine chose an Emily Dickinson line and spread it out like so:

My
life
had
stood
a
loaded
gun

As you might guess, the exercise goes smoothly until the last word. What is the opposite of gun, after all? His students argue, divide, pledge allegiance to opposing words. And for Constantine, the story of “The Opposites Game” becomes a poem of sorts of its own.

As a teacher, you can show this film and stop before Constantine shares all of his students’ choices for antonyms. Turn the process over to your students and write their ideas on the board. Finally, play the remainder of the film to see how many matches you find.

After that? Easy. Create your own opposites games by simply scouring around the poetry books that surround you. Put a line on the board, especially one with a tricky word like Emily’s, and turn ’em loose. It’d be a great daily warm-up during a poetry unit. (Not that I sequester poetry into “units.” I prefer to pepper poems over the course of the year.)

Nota bene: Not a teacher? You know what they say to doctors: “Physician, heal thyself!” Meaning, as a writer, you can play the game yourself. (“Poet, create thyself!”)

It will not only have you reading good poetry, it will have you thinking of endless variations on a theme of opposition.

“How antithetical of me,” you’ll say afterwards. “I’m such a contrarian sometimes. And we’re not even talking politics here!”

That’s the refreshing part, isn’t it? Because the opposite of politics is….

2 thoughts on “Opposition in the Poetry Classroom”

Lost Sherpa of Happiness
The Indifferent World
Follow Updates on a Free-Verse Life on WordPress.com